In Clerihan community field on Sunday morning the very first ever Girls minor team took to the field against Ballyporeen although the result was not in their favour they did themselves proud and never gave in all through the game even though they were up again a superior team.Aisling Ryan scored the very first goal and score for the team midway through the first half,  Emer Lyons and Eileen Flannery shared 5 the rest of the scores and Rachel Hennessey scored the last point of the day in a total of 1:06 which was very creditable against such strong opponents so we wish the girls lots of luck for the remaining games and hopefully their first historic win will come in the near future.

Player of the match was outstanding young goalie Holly Corcoran.

A courageous performance from an understrength Clerihan outfit almost got a famous win after Steven Earley had shot what looked like the winning point with time up on the clock but Cahir managed to sweep down the field and equalise 2 minutes later and in extra time the battle that had gone on before took its toll on Clerihan who lost 2 players with serious injuries and simply ran out of steam to their more illustrious and more experienced opponents.

Clerihan shocked Cahir when Jamie Kelly scored an opportunistic goal with an early free, from there to the end Clerihan fought toe to toe with Cahir and the lead swapped hands on several occasions culminating in those final few frantic minutes, Indeed if Clerihan had been at full strength (5 Players unavailable due to injury and work reasons) victory would have been theirs in normal time, but credit Cahir whose extra fitness proved to be decisive in extra time. Instead of singling out any individual player credit goes to the 18 that played on the day and hopefully their day will come soon and winning 6 matches during the year shows an upward trend that hopefully will keep rising the coming years.

Our under 8, 10 and 12 hurling squads  played for the Cooney community shield over the weekend for the harvest festival celebrations  which was a huge success, all the boys really enjoyed the games which were watched over by the eager eyed ref Ciaran Barrett. Presentations were made on Sunday at the festival by the Johnny B and the team captains received the shields and all the boys were presented with medals , well done to all the teams involved, under 8’s were the slievenamon hilbillies v clerihan warriers  , under 10’s were clerihan tigers v clerihan wolves and under 12’s were slievenamon fox’s v clerihan indians . thanks to ciaran for his expertise in controlling the lads and keep up the good work, you are the stars of the future. 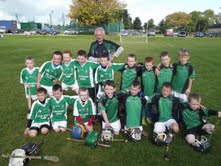