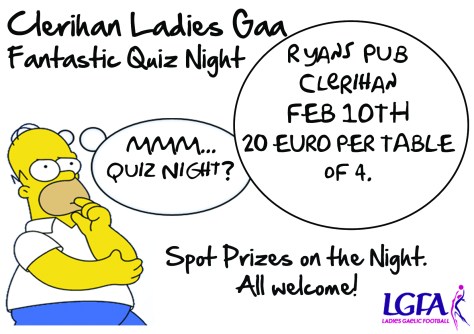 The last club meeting was held on Friday night and we want to welcome on board our new treasurer Nicola Maunsell  who i’m sure will do a fine job.

The under 14’s will commence training on Saturday on the all weather pitch between 6 and 7 o clock and we want a full turn out. All training times and dates for the coming season will be announced shortly so watch this space for details.

We would also like to wish Paddy Murphy a speedy recovery after his recent illness and hope he’s back in action soon.

Congratulations to our club Chairman Tony Lyons on his recent windfall in the Tipperary draw , lets hope he spends it wisely . There is still three places available for the first aid course so you can contact any officers with your name and contact details .

Under 6 girls will be managed by John Griffin and training will commence on Tuesday 7th February in the school hall between 6 and 7.

Under 8 girls will be managed by Paul Casey and training will commence on Tuesday the 7th February in the school hall between 7 and 8.

Under 10 girls will be managed by Paddy Flannery and training will commence on Wednesday the 8th February in the school hall between 7 and 8.

under 12 girls will be managed by Edmund Rice and training will commence on Thursday the 9th February on the all weather , time to be confirmed.

Next ladies meeting will take place on the 9th of February in the school hall at 8 o clock so see you all there.

Clerihan ladies began their season in this year’s women’s soccer league with a close run victory over league newcomers Dualla Ladies FC on a wet and windy evening in Clerihan last weekend. The home side started quicker than a nervous Dualla, and scored within the first five minutes, before leaving the Dualla girls chasing for the rest of the first half. Perhaps it was first night nerves, but Dualla never showed their true ability, and Clerihan had the better chances to open a bigger lead, but still went to the break only a solitary goal to the good.

However, they made amends in the second half, and converted two goals through Marie Mulcahy and a cheeky lob from Amy Tobin, to put them clear, and seemingly coasting to an easy victory. Nevertheless, Dualla showed why they have had some success in pre season friendlies, and why they may become a force to be reckoned with as they gain more experience, when they finally woke from their slumber. A speculative free kick from Jenny O Dwyer was latched onto by Dualla striker Amy Bargary, and finished with the minimum of fuss to the Clerihan net, reducing the lead to two goals.

Within minutes, the same two players combined to reduce the lead even further, when a well crafted pass from Amy Bargary split the Clerihan defence open, and this time it was her partner in crime Jenny O Dwyer who stole through to finish in the bottom corner. It seemed that an unlikely comeback was on the cards, but Clerihan regrouped and held out to claim the three points in the end.