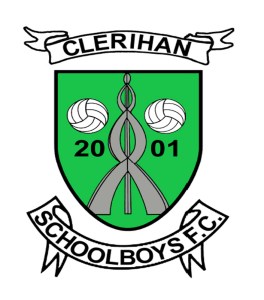 Clerihan Schoolboy Football Club was established in February 2001 when a few interested parents got together to discuss the establishment of a soccer club to cater for the expanding village of Clerihan and the surrounding areas. To test the level of interest in the locality, a training session was called for under 10’s and for that first training session, 14 keen lads turned up. At the time, the club had no pitch, no equipment and no skills in the coaching of soccer teams, but there was enthusiasm to get the club going. The club became affiliated to the TSSDL and in the following years the club grew to the point where it had teams participating at all ages up to under 16. In recent years, the club established an Academy for younger players aged between 5 and 10 where the emphasis is on fun and learning basic soccer skills. The success of the club prompted the establishment of a junior team and youth team which compete in the TSDL league. Indeed some of the players that turned up for the first training sesssion in 2001 are now playing at this level. A ladies team has also been established.

The club has grown from strength to strength, and we were honoured when our 10th anniversary was marked by a visit of the National Soccer Team Manager, Giovanni Trapattoni. During the visit, he presented player of the year medals and trophies, stood in for photographs and signed autographs. This was a great occasion for the club and for the people of Clerihan who have been so supportive of the club since its foundation.

The club has a membership in excess of 130 players, and many of the coaches involved in the club have undertaken coaching courses which will no doubt have a big impact on the competitiveness of the club in the coming years.

New members are always welcome, and we are very grateful for all the support and sponsorship over the years. We are very grateful to the late Fr O’Bric who provided us with a pitch in the early years. Without him, the club would not have developed to the level it is at today. We are also grateful to Clerihan Community Council for having the vision and the energy to provide the excellent facilities we currently enjoy.

The club has been knocking on the door for success in leagues and cups at all ages in recent years and it is only a matter of time before major success comes our way.