This year’s camp takes place 23rd July. The camp is sponsored by Kellogs. Cost is €55 per child, 2nd child €45 and 3rd/4th/5th child €40. Booking forms can be had from club coaches or camp coordinator Tony Lyons mob 0863887771. There is also a €5 reduction by booking on line using a code on Kellogg’s boxes and logging on to www.gaa.ie/kellogsculcamps   Please note online bookings close 12 noon on the Friday before the camp.

The club would like to thank Moyle Rovers for an excellent U8 memorial blitz last week in memory of David Boland and all the kids had a great day and were delighted with the medals and refreshments afterwards and we look forward to many more blitz’s in the future.
Clerihan ladies Gaelic football club would like to thank Theresa Ryan from Clonmel Office Supplies for printing up our quiz cards for our fundraiser, free of charge.  Much appreciated Theresa.

Our U10’s begin their summer blitz at home on July 4th. We are in group two with Fethard A and B and Clonmel Og .There are six groups altogether and each group will be assigned a co-ordinator to ensure that games are being played and that the format of the programme is being adhered to by all clubs. Each team will host a mini blitz as its hoped that this will maximise the playing time and involvement of all the players.

All teams will then be invited to take part in a County under 10 blitz to be held in Dr. Morris Park, Thurles on September 22nd. 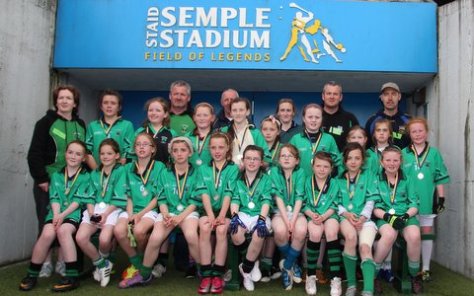 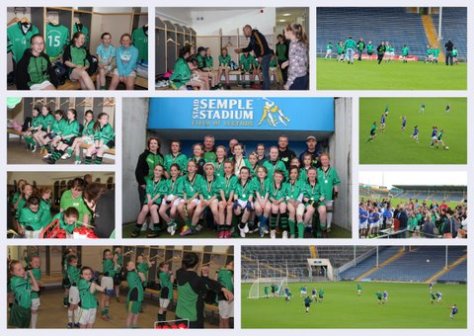 Clerihan Junior Hurlers created a little bit of history in damp and wet Goatenbridge last Wednesday night. By beating Ballylooby/Castlegrace in the South Junior Hurling Championship the club recorded their first win at this grade in almost 50 years. Clerihan began the game brightly with early scores from Andrew Ryan and Stephen O Dwyer settling the team down. The game entered a scrappy period after the early exchanges with both teams struggling with the very difficult underfoot conditions. Clerihan re-exerted their control before half time and a fine goal by wing forward Andrew Ryan left Clerihan 1-8 to 0-3 in front at half time.

This year’s camp takes place 23rd July. The camp is sponsored by Kellogs. Cost is €55 per child, 2nd child €45 and 3rd/4th/5th child €40. Booking forms can be had from club coaches or camp coordinator Tony Lyons mob 0863887771. There is also a €5 reduction by booking on line using a code on Kellogs boxes and logging on to www.gaa.ie/kellogsculcamps   Please note online bookings close 12 noon on the Friday before the camp.

The club has a surplus supply of official Club Merchandise for sale at reduced rates, for further information you can contact 086 2520715

Our under 8 boys went to Cahir for a hurling blitz on Saturday  morning and a thoroughly enjoyable experience it was , its great to see the club players of the future in action at such a young age , we have some promising players in the making, the club would like to thank Cahir for everything and the refreshments afterwards were well deserved and enjoyed by everyone, well done.

Clerihan under 12 girls met St. Pats on Sunday morning. Clerihan entered the game missing two key players due to injuries received last Monday in the County Final. The girls put up a great fight but it wasn’t to be their day with St. Pats the stronger side coming out on top. Well done to everyone for a great game.

South U12B Football Final Replay
Clerihan met Kilsheelan in the long awaited replay of the U12 South Football championship Final. After a cracker of a game in Clogheen a few weeks ago when the sides could not be separated after extra time, expectations were high that there would be a similar game this time out. However the day belonged to the Kilsheelan lads who finished the game strongest and ran out four point winners. All credit to the Clerihan lads who matched their opponents throughout the game. The lead changed hands on a number of occasions and Clerihan were in the game up to the final whistle. Congratulations to Kilsheelan on winning and those connected to the team. Well done to Clerihan and thanks for entertaining those who followed them with a great brand of football. Well done and thanks to all connected to the team. Thanks to everyone associated with the team.

Everyone in Clerihan GAA Club is proud of your achievement. Roll on the hurling championship.

Tipperary Members Draw
The first draw of the 2012-2013 Tipperary members draw takes place 8th June. This is a very special draw with 25 cars to be won marking the 25th Anniversary of the Tipperary Clubs draw. In addition, there will be 25 prizes of €500 each month for the entire 12 months, and of course the weekly lotto of €1000 and all this for a membership of €100. The membership can be paid by Direct debit, monthly at €10, 5 x€20, 2 x€50 or €100 .As half of the money collected will go to Clerihan GAA it is a great way to support the local club. Contact any member of the committee if you wish to join.

This year’s camp takes place 23rd July. The camp is sponsored by Kellogs. Cost is €55 per child, 2nd child €45 and 3rd/4th/5th child €40. Booking forms can be had from club coaches or camp coordinator Tony Lyons mob 0863887771. There is also a €5 reduction by booking on line using a code on Kellog’s boxes and logging on to www.gaa.ie/kellogsculcamps  Online bookings close 12 noon on the Friday before the camp.

Clerihan under 12 girls played Clonmel Commercials last Thursday evening in a home game which saw Commercials give a spirited performance in the first half and  were two points up at the half time whistle. The second half was a different ball game altogether after scoring an opening goal Commercials were to see their lead drift away from them when Clerihan upped their game with a fantastic performance in midfield from Kate Corcoran and Emma Hennessy and full backs Lisa Walsh, Mia Cooney, and Fiona McGrath who were impenetrable and a super performance from Orla O”Donnell in goal. Centre backs Catriona Rice scored one goal and two points and gave an outstanding performance,  Mairead Browne and Romy Mc Carthy were superb. The forwards line out as follows Hannah Phelan scored one goal , Chloe Lawerence, Chelsea O Mahony, Ashling Morrissey,  Ashling Gillman and Danielle Foley and super subs Kayleigh Flannery who scored two points and Caoimhe Mulcahy who scored a goal and Megan O Donnell. Clerihan put in an outstanding effort to come back in the second half to win the game and well done to the Commercials girls for an excellent  game. Well done to Edmund and John who prepared the girls for the game.